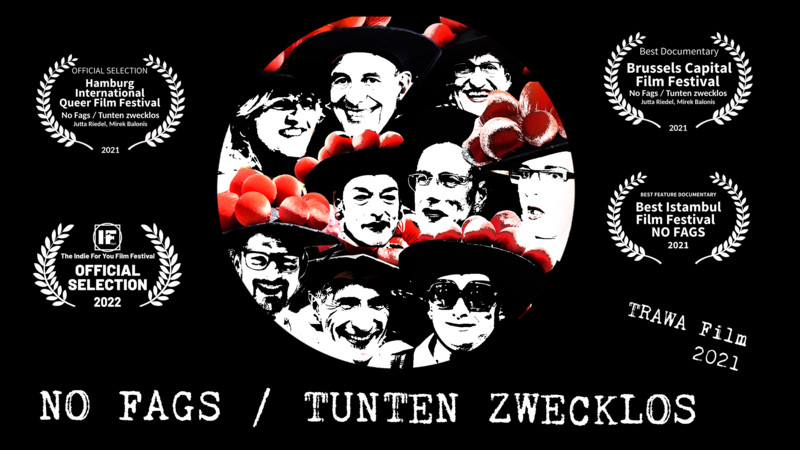 "Faggot as a swear word: gay sow, the stupid faggot, faggy gait, faggy posture, the broken wrist. Loud gays, colorfully dressed, shrill, can they present the gays?.." asks Volker in the film.
"The documentary was discussed very controversially in the program group...as a document of gay history, gay solidarity and gay self-confidence. At the same time, there was ... concern that a part of the queer community will feel hurt by certain parts of the film..." Hamburg International Queer Film Festival
"...It made me cry, especially when it came to the topic of parents - rejection, distance, getting closer again, taking care of old parents, saying goodbye... the different aspects of being gay... A tribute to friendship and solidarity - even if it wasn't always there in the times of the HIV panic." Maria Dünnwald
"I am moved enthusiastic dynamized.... political film at its best... finally the audience was not underestimated for once, without a lecturing gesture.... Afterwards you can breathe more freely." Claudia Reiche
"... a lot of creativity, perseverance, good humor and cherry brandy.... I think the film transports this belief in the good and beautiful in the faggot, in the human being.... In addition, of course, it reflects a piece of contemporary history!" Matthias Möbius
"...Very impressed! The animated drawings and the music make the whole thing a contemporary historical document in idiosyncratic narrative, which I find valuable! And important for our time today!" Barbara Nestler
Voice from the Hamburg premiere audience: "I would also like to have a Bollenmädelsgruppe - a group of people that accompanies you through life and where you stand by each other despite all your differences."